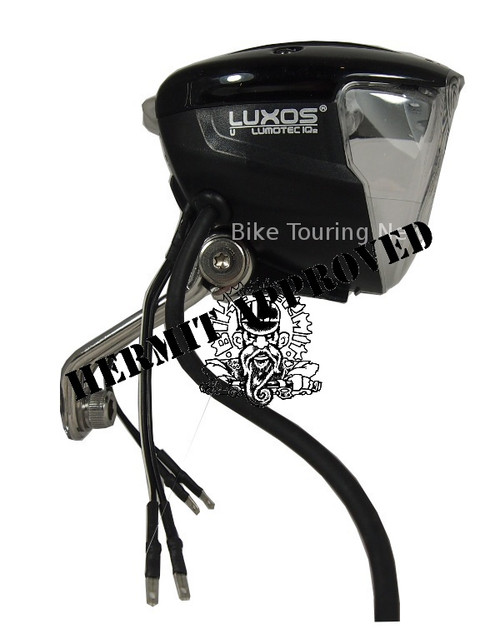 The Luxos U IQ2 is far and away the most advanced bicycle headlight available. Powered by a dynamo hub, it has a USB port for charging other electronic devices and it has a built in cache battery for those devices which might switch off when the voltage drops.  This is the redesigned Luxos U. The original version housed the USB port in the handlebar control button. Apparently there were issues with wet weather since there was no way to protect the USB port. The new version incorporates a hard wired outlet from the handlebar button into which the USB cable is plugged. An additional plastic cap is included to cap this output wire when the USB wire is not plugged in. This seems pretty fussy so I just leave my USB lead plugged in (since I would lose it anyway) and tucked into a pocket on my handlebar bag.

There are two pairs of spade connectors on the back of the light with included jumper wires. One set is for the input from the hub and one set is for a powered tail light which is powered from the head light. A two-strand wire is included for either the input ot tail light output but if you are going to use both you will need another wire; either the coaxial wire with connectors or the double strand wire with connectors.

If using a Schmidt hub you will also need the bigger spade connectors for the Schmidt contacts. The other option would be to get the Schmidt coaxial wire to run from the light to the hub.

For handlebar mounting, use the Schmidt Handlebar Mount

The Luxos U's beam automatically changes with the rider's speed, always producing the optimal beam pattern for that speed. There is a "Panorama" mode, in which power is shifted from the main LED to two side LEDs that illuminate the road close to the bike and to each side. The shift in power is done automatically below 15 kph, about 9 mph. The slower you go, the brighter the panorama LEDs glow.