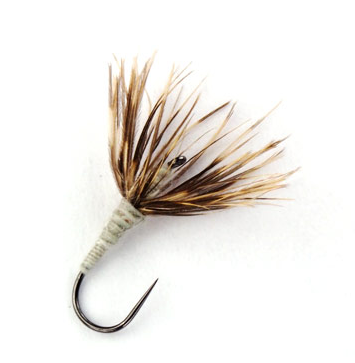 While you can use any fly you like with your tenkara rod, traditional reverse-hackle tenkara flies (or sakasa kebari) are incredibly versatile and undeniably effective.  Their design imitates a wide variety of potential fish food and the reverse hackle allows subtle fish-enticing action to be imparted.

This is the only tenkara fly used by Mr. Katsutoshi Amano.  Like most tenkara masters in Japan, Mr. Amano sticks with one fly pattern and his entire box is filled with the same exact fly - same size, same color.  This tenkara fly comes alive when underwater, especially if pulsated.

Mr. Amano's favorite way to fish it is to cast slightly upstream and do a 4-count up and down motion following the fly downstream.  He fishes it under the surface, and when the fly is pulled up its hackle opens up, when relaxed the hackle closes.